The Star Wars saga is complete. Lucas tried to do something different
with this media franchise: the books, comics, Clone Wars cartoons, and games
were part of the canon. Some provided valuable background to the films,
filled in key events, and were even referenced in the films. How well did this work?

In Another Media: Script Writing

Scripts aren’t just “filmed books,” they are a whole different way of writing. How do
you approach writing a script? Should you try a movie or episode of a current TV show?
Adapt a book or write something original?

Eldon had the following to say about his first Worldcon:

"With all of its castles and ancient medieval history, what could be better than a fantasy convention held in Scotland? For my money, not much. So when the opportunity came along to visit the homeland of legendary characters such as William Wallace, Robert the Bruce, Rob Roy MacGregor, Sir Walter Scott, and so many others, I threw caution—and finances—to the wind in order to take the trip. Now that it’s over, I’m glad I did.

The country and its landmarks are every bit as impressive as I’d imagined. Photos just can’t quite capture the majesty one feels when driving through the Highlands, gazing up at the National Wallace Monument, or crawling through the ruins of a castle that has stood for more than 700 years. Indeed, whether natural or manmade, the lands and their structures are amazing enough. But it’s the weight of history that accompanies everything that made it all an almost spiritual experience.

Oh, and there was also a convention to attend. From a fan attendance standpoint, Interaction was quite a bit smaller than, say, Comic-Con. We’re talking roughly 5,000 as opposed to 90,000. But those who did attend were the truly diehard, full of enthusiasm and goodwill. With many sporting costumes, native accents, and a voracious appetite for undiscovered works, it was a festive and nurturing atmosphere.

Celebrating fandom can be a wonderful thing. But the true boon for all attendees, I soon realized, was the chance to connect personally with professional writers, artists, and editors within the field. Once again, I certainly got my money’s worth, encountering the likes of Kevin J. Anderson, Iain M. Banks, Terry Brooks, Robin Hobb, George R. R. Martin, Anne McCaffrey, Juliet McKenna, China Mieville, Stan Nicholls, and Terry Pratchett—to name a few. That doesn’t even include those in attendance whom I did not get a chance to see, such as Greg Bear, Trudi Canavan, Susanna Clarke, Kim Stanley Robinson, Robert Silverberg, Harry Turtledove, Connie Willis, Jane Yolen—the list goes on.

The panels, as always, were great fun, whether I was viewing or participating. A great big thank you to fellow panelists Kevin J. Anderson, Paul Cornell, Craig Miller, Chris Roberson, and James Swallow for sharing their insights and allowing me to express mine. Also, my sincere appreciation to those few brave souls who attended my first ever public reading. There aren’t too many things that put butterflies in my stomach, but that did. Last but not least, my thanks to Diana Gill of HarperCollins for her time and attention, to Tim Holman of Orbit for an invitation to their cocktail party, and to Terry and Judine for perhaps the nicest dinner I’ve ever had.

I could probably put together quite the travelogue on all that I saw and experienced, from the scenic train rides, to the herds of wildlife, to people being hit by buses, to chatting with one of the Queen’s guards outside her Balmoral Castle estate—where she was in residence at the time. But I’m behind deadline on my other work as is, and anyone who started reading this probably stopped a long time ago. So I’ll leave off with a photo instead, from outside the SECC, where the convention was held. Others will be posted to the Photos page, once we’ve had a chance to go through them. Hopefully, they’ll provide at least some small sense of the grand time we had on this trip." 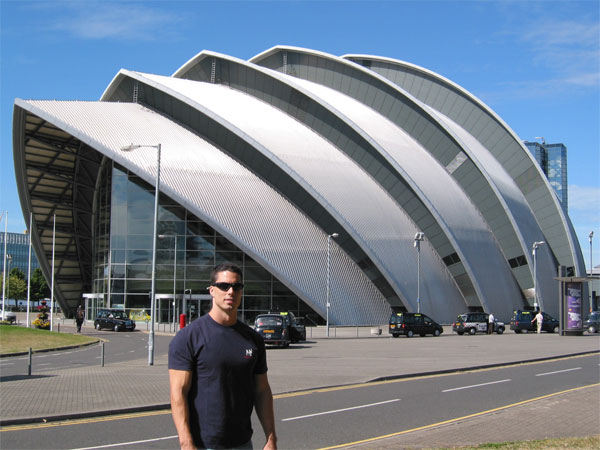