When: May 25-28, 2012 Where: Ruby’s Inn and Convention Center, Missoula, MT. Now in its 26th year, MisCon is a four-day celebration of literacy and the arts within the science fiction, fantasy, and horror genres. Held each Memorial Day weekend (Friday through Monday), MisCon has something to fascinate, educate, and entertain at all times.

Recap Eldon had the following to say about MisCon 26:

"Having attended several of the mega-conventions like San Diego Comic-Con (125,000-plus attendees) and Dragon*Con in Atlanta (70,000-plus attendees), one might expect the gathering of just a few hundred fans in a community like Missoula, Montana to be a bit tame by comparison. But I must say, I was highly impressed by the show put together by Cthulhu Bob, Justin, and their gang of eager volunteers. Turns out, there’s much to be said about a quieter, more intimate convention experience, where you don’t have to fight through a press of thousands just to buy a highly overpriced drink or hamburger. And when you get right down to it, it’s the enthusiasm of the attendees that really makes a convention work, not their numbers. In that regard, MisCon may be the best con experience I’ve had to date. All of the panels that I appeared on were well attended, with a high level of audience participation. The writers whose work I helped critique as part of the writer’s workshop were earnest, attentive, professional, and appreciative. The organization was top-notch, with more folks than I can recall going above and beyond the call of duty to ensure that everyone–pros and attendees alike–behaved and enjoyed themselves. Impressive, considering attendance reach a record high, essentially doubling the usual numbers. I think we can safely blame Guest of Honor George R. R. Martin for the bulk of that. From what I heard, there were fans who drove eight hours or further just to stand in line and get the man’s autograph before turning around and driving straight home. With gas prices being what they are, that bespeaks some true dedication.

Which brings me to another key selling point of a convention like MisCon. At Comic-Con these days, most fans are lucky to get within a hundred yards of someone like George. At MisCon, even if you stood at the very back of the room in which one of the man’s panels were held, the distance was more like 100 feet. If you wanted a word with him, or a photo, the opportunity was there. If you wanted to hang out in one of the late night party rooms, there was a good chance you could sit near him, sharing drinks and listening to stories. A much more intimate experience than you’re likely to find at a mega conference. Several hundred got to watch episode nine of the second season of HBO’s adaptation of Game of Thrones with George himself, with a Q&A afterward in what was almost a living room setting. Doesn’t get much better than that.

Other highlights for me included getting to know several of the other attending pros. Ty Franck (one half of the pseudonym James S. A. Corey), whose debut novel Leviathan Wakes has been nominated for several major science fiction awards, could be a stand-up comic if he were to ever tire of the writing gig. Peter Orullian, whose debut fantasy epic The Unremembered has also made industry waves, is not only an insanely talented writer, but a mean rock vocalist who was kind enough to belt out some karaoke tunes with a little prodding. Urban fantasy author J.A. Pitts (don’t worry, John, I won’t tell your readers you’re not a woman) offered some great advice and seemed to appear on every panel over the four-day weekend without complaint. Terrific and entertaining gentlemen all who–among others–would have made the event well worth the price of admission, even if George had been unable to attend.

I understand that next year, the literary guest of honor will be Jim Butcher. The inimitable Patrick Rothfuss was also going to be there, but had to bow out due to a scheduling conflict. Expect to see him somewhere down the road. In other words, Bob and Justin seem to have a knack for drawing the best and brightest to their "little" convention, and as overwhelmingly positive word-of-mouth spreads, I’m certain they will continue to do so. For science fiction fans out there looking for a fun, creative, intimate experience without the madness of the metropolitan masses, allow me to toss in my own recommendation for the increasingly popular, highly satisfying experience that is MisCon." 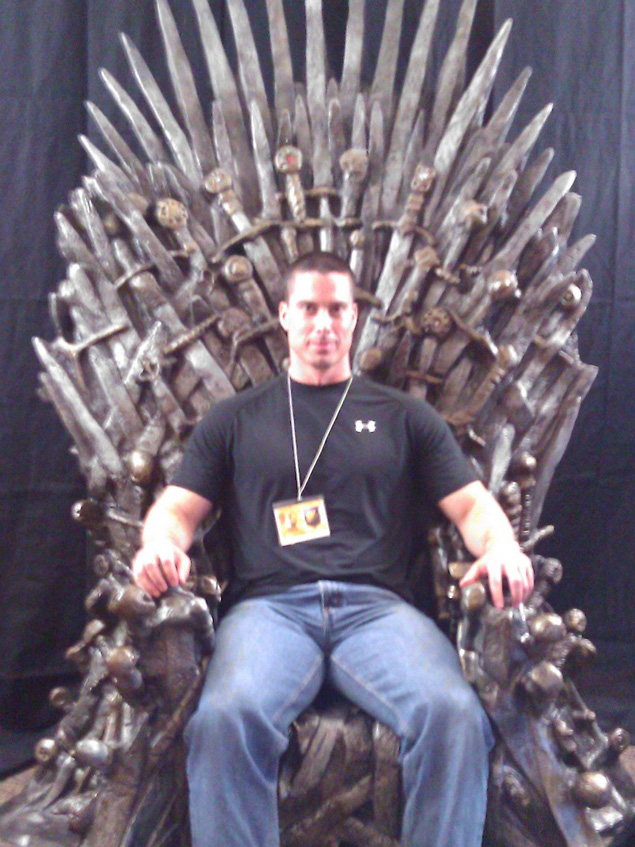